Dr. Michele Chalmers was born and raised in the San Francisco Bay area. She graduated from Acalanes High School in Lafayette, California, receiving the “Craftsman of the Year Award.” 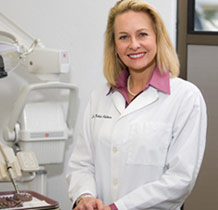 During her four-year doctoral program at USC, she was on the Dean’s List and was awarded the Frank Lott Memorial Award for excellence in partial and complete removable prosthetics.

Dr. Chalmers is the proud mother of her two children, Caroline and Michael. She enjoys gardening, cooking, and travelling.